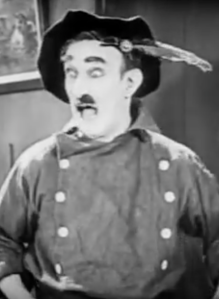 You’d have thought they’d cast someone older to play his father – or got him to wear a wig!