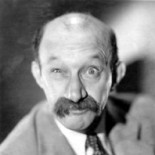 Tell It To A Policeman

James Finlayson, comedian at the Hal Roach studio, reported to the police yesterday an attack on him by a robber, who he beat off. Finlayson said he left the apartment of a friend at Forty-sixth street and Western avenue about 1 a.m. As he was getting into his car, a man with a hat pulled down over his eyes approached and said he was an officer. Finlayson said he asked to see the man’s badge and the man struck him with a blackjack, but the actor dodged and the blow fell on his shoulder. Then he shoved his knee into the man’s stomach and ran, he said.

Somewhat ironically, just a few months after this incident, the film TELL IT TO A POLICEMAN was released on 24 May 1925. This Roach-Pathé comedy two-reeler, directed by Fred Guiol, features James with Glenn Tryon and Blanche Mehaffey. It’s the first in a series of films where Finlayson supports Tryon, the others being THUNDERING LANDLORDS, MADAME SANS JANE, CUCKOO LOVE and FLAMING FLAPPERS. The review in Motion Picture News described it as “fair entertainment”,1 whilst Exhibitor’s Trade Review thought it “chock-full of laughs and thrills”.2 Make up your own mind by viewing it on the Internet Archive here.

Blackjack: a small, flat, blunt, usually leather-covered weapon loaded with heavy material such as lead or ball-bearings, intended to inflict a blow to the head that renders the victim unconscious with diminished risk of lasting cranial trauma.

Six years later, James was once again assaulted by a blackjack-wielding robber, but this time did not make good his escape:

Struck with a blackjack in the hands of a highwayman, James Finlayson of 6141 Afton place was knocked unconscious today when his assailant found he had no money.

6141 Afton Place was the address of the Afton Arms, where Finlayson had been staying for at least 4 years.3,4

The idea of a movie star not having any money seems far-fetched, however in March 1932 James was sued by the accommodation for $620 rental (the equivalent of about $11,000 today).5

The intimation of his death in The Falkirk Herald – which was no doubt based on information from his younger brother Bob who was an occasional correspondent – mentions that Finlayson “lost a large part of his capital in the California bank crash”.6 This could refer to one of the many bank failures which occurred in America in the aftermath of the Wall Street Crash of 1929.

So, maybe James Finlayson was broke in November 1931 and had no d’oh after all!